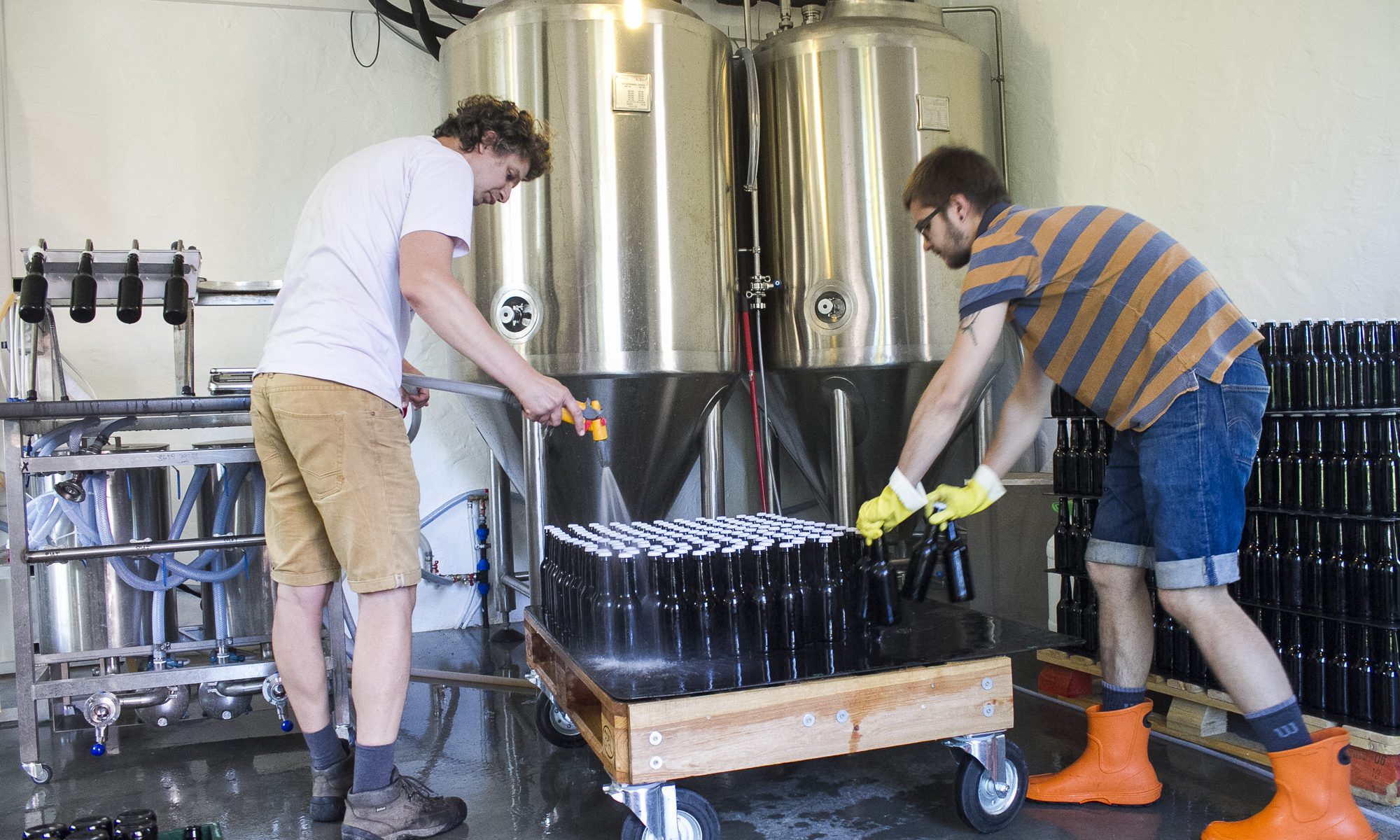 Sometimes Lithuania’s commercial brewers act like some sort of partisans. The less you know about them the better they feel. Some of them have nothing much to tell about themselves, the others are just pushing you the idea of modern experimental crafty stuff while hiding their macro heritage in the shadow and the rest just let the rumors talk about them. However we are not that type. From the very beginning we are loud and clear, because we like to talk about what we do and we have nothing to hide. We’re “Sakiškių alus” – a micro brewery run by a couple of home brewers who couldn’t bear brewing quietly in their garages and kitchens anymore.

I haven’t met a single home brewer in my entire life who wouldn’t dream of starting a brewing business instead of just keeping it as a hobby. We also had this idea from the very beginning, and as the years went by, it just refused to leave our heads. So we quit almost everything except our families and started brewing in our small micro brewery in the middle of the woods.

In Vilnius home-brewers community we are well known as Linas Zakarevičius and Gediminas Volkas. Linas has discovered the hobby of home-brewing just out of the curiosity as a wish to make something unique. This old idea of beer being the result of a very hard and equipment demanding technological process was just asking of being denied itself. He started learning from the traditional country side brewers but soon he discovered different technologies and modern-day ingredients. The old days of just messing around the brew kettle without knowing what to expect from the final product were over. The results got better and better. Modern-day equipment, well modified malt, new hop verities and different yeast strains let Linas learn a lot and made him a modern home brewer who knows how to calculate brewing water salts and what to expect from the fermentation. He’s been in the paper business for a long time and now he’s ready to start a new one – his passion – the brewery.

My story was different. In the year of 2010 – 2011 I was living in UK. And that time was phenomenal. This whole craft beer thing just reached UK from the States and suddenly everyone was talking about different hop varieties, yeast strains, etc. New breweries and craft beer dedicated pubs were opening everywhere. Craft beer became cool and trendy. As a young and curious immigrant looking for his path in life I was just carried away with this big wave of craft beer. After coming back to Lithuania I was looking for tasty and intense beers that I was just used to, but I could not find any. So I decide to make it myself. That’s how hoppy IPA’s, intense stouts and porters started bubbling in my kitchen. I was getting better in brewing so I started blogging about it. As I was already spoiled by great beers and the ways they were marketed I had this bitchy “all or nothing” attitude towards craft brewing. That’s how I’ve joined the very first Lithuanian craft brewery “Dundulis” and became the sales manager for Vilnius region. I have spent two years there before joining Linas at “Sakiškių alus”.

Combined together we have won some awards with our home-brews but the only true award we are chasing after is our commitment to brewing flavor focused beers and accepting no compromises. As beer consumers we are not happy with what our local market offers and we are here to make a positive change. We want to brew stuff that requires attention. We are not afraid to scare you. We have always made beer like this for ourselves. Now we are making that for others too. We are the so called bottom-up initiative. But at the end of the day, we are still home brewers in our hearts, the only difference is that we have way bigger kettle now.

Our self made brewing system lets us make approximately 500 l of beer at the time. Our fermentation tanks are 1000 l each so we have to do two brews in a row to get one tank filled. Two tanks will let us squeeze 4000 l in one moth if the process is well planned. Even among Lithuanian micro breweries we are considered as small and tiny by size. But we have big ambitions to become the leader of the local market by offering well made innovative modern craft beers. We’re on the right track and there’s no chance we turn around or choose the easiest way. We’re two naive home brewers. We’re – “Sakiškių alus”.