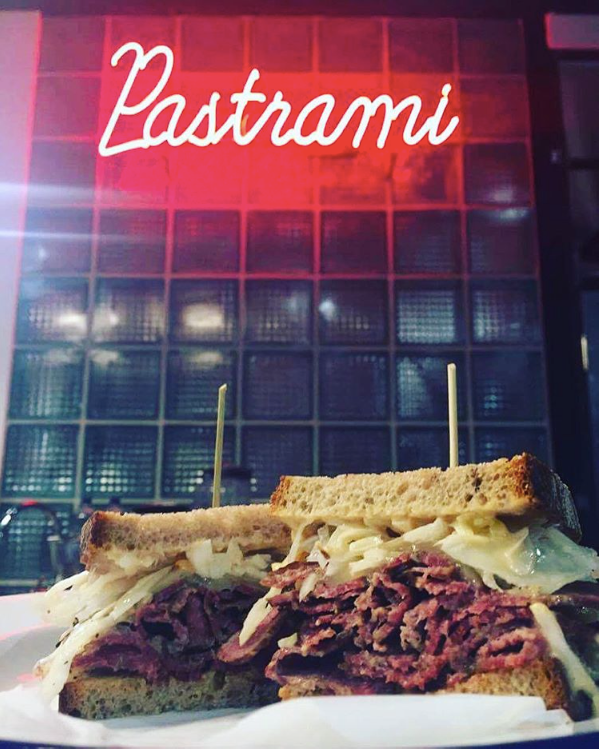 We are known for turning strange things into beer. Recently we made a collab with Distilerija. Guys own a bar in central Vilnius and they wanted their own beer, something unique that no one around has. Well, so we made them a Gin Tonic IPA. This time our friends from Drama burger gave us a call and asked if we wanted to brew pastrami beer. Hell yeah! That’s how we roll.

If you’re familiar with street food culture we bet you know what pastrami is. For those who aren’t – pastrami is usually made of beef brisket that has been brined, rubbed in spices, smoked and lightly steamed. The meat takes around a week to produce, but time and different techniques really make this meat special. It’s so smoky and tender it literally melts in your mouth. What do you do with your pastrami? You thinly slice it, stick it in between two sandwich bread peaces. Some mustard, pickled cucumber and you’re done. This is classical New York style pastrami sandwich and guys from Drama burger were the first ones to introduce this street food classic to hungry mouths in Vilnius.

Pastrami sandwich was originally made in 1887 by Sussman Volk in New York. In fact his sandwich became so popular Mr. Volk was forced to close his butcher shop and open a deli. What we did not know is that Mr. Volk was Lithuanian. Apparently he arrived to States as an immigrant. We were so surprised to get to know that. Not to mention that our brewer (Mr. Volkas) shares the same family name with Mr. Sussman. So we took this job of creating pastrami beer very seriously. That was not any longer just about great beer. That became a question of honour.

German beech wood smoked malt was chosen as a base of the beer. Some malted rye mimics bread character and the rest is left for the spices. Rose & black peppers, coriander seeds, bay leaves, cloves, cinnamon, fennel & mustard seeds, chili peppers found their way into this brew. As a result we got liquid pastrami :) Just what we expected. Well, it took us some small volume test batches to dial in the final recipe but we could not be any happier with the final result.

This beer is definitely not for everyone. Some people might even be offended. But if you like your beers smoky and dark just  take a seat at one of the Drama burger branches, order your pastrami sandwich and some liquified pastrami in a pint glass.

For more info  about our pastrami beer click here.